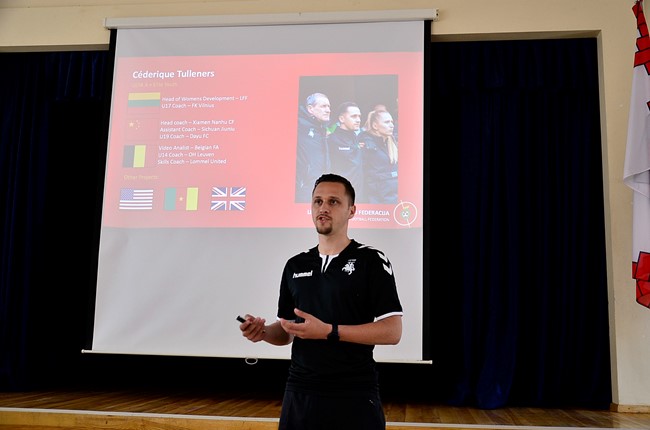 Cederique Tulleners – Belgian football coach, who was given to look after the Lithuanian women football development. Since January 2020 C. Tulleners carries out various football innovations, which already were appreciated by players and coaches.

Tulleners is a regular visitor in Lithuanian women A and First league games, where he scouts potential female players as well as assisting national women team coaching staff. Possessing a UEFA A license in coaching Belgian executes project with open training, which is an extra opportunity for all the players around the Lithuania to gain new experiences and unite local coaches for common goals.

With 11 years of coaching experience, 6 of them C. Tulleners he worked in Belgium, then in China as head coach and assistant coach. Cedrique’s first encounter with women football appeared in USA, in 2013, where he became a head coach of one high school.

In 2019 he returned to his hometown, where he worked as a video analyst in Royal Belgian FA and assisted the coaching staff of national women team. Afterwards, he moved to Vilnius, the capital of Lithuania C. Tulleners where he is sharing his experience with Lithuanian football federation.

-Please tell about Your first steps and impressions working as the Head of Lithuanian Women‘s football development?

I’m pleased to have the opportunity to help develop the Lithuanian Women’s Football. Like in all countries, there are some areas that are already very well developed in women’s football and some areas that still can be improved. It’s my job together with the people around me and the people within the clubs to face the challenges and take every opportunity to develop the women’s football further.
In a relative short time and with the influence of COVID-19, we already took the first steps. We created and implemented a style of play into the national teams with success. Based on the Strategy Plan of the Technical Director, we created a specific Action Plan for Women’s Football. We organised together with the technical department Workshops including Women’s football in several counties. This will continue in the near future. We started with open Regional Trainings for 2005-2007 girls. We are weekly scouting first and A lyga. And many more things we are working on behind the scenes.

This was already written in the strategy plan. From now on, the girls and the boys are treated equally. So together with the boys we will restart in August around the whole country with Open Training sessions. The idea is simple, we want all girls to have a chance to show their abilities to Regional and National coaches. Everybody dreams of reaching the national team, so everybody deserves a chance to show themselves.

-Were your expectations fulfilled? (About girls ‘motivation, players and coaches participation)

I am extremely pleased with the participation and motivation of the players. The girls are very keen to learn and improve. I am saying this already from day 1: “We really have talented women players. We need to work well with them”. And of course, I want to thank all the coaches for participating and showing their passion to improve Women’s football. For me it’s a pleasure to see that coaches of different teams work together with us to improve the Lithuanian Girls.

-It is important to mention that you executed the sessions personally and all were held in English – it was intriguing for the girls. How it felt for you?

It’s very easy, because the girls understand English well. When there is a sole case that someone doesn’t understand a specific English word, that’s not a problem. Because we also speak the “football language” so based on the context, body language and showing the example, the girls always understand. Next to this there are also local coaches who can speak Lithuanian if it would be really necessary.

-Most of these girls already play in the Women‘s First League. What value have they received by attending extra training sessions?

Every minute extra that you spent with a football, is another minute you can become a better player. So every additional training will help players to develop. Next to this, it shows us also that a lot of girls are very keen to do extra training and they want to improve.

Going to additional trainings with players from different clubs and coaches you don’t know is good to get some other insights in football. Every coach has their own accents and even though we all are sending the same messages, every coach will deliver the message different. It’s good for the girls to see all different ways. Next to this, it’s challenging to play with and against others who you don’t know. This will bring the best out of the girls.

-What we could expect for the future open training sessions and other projects? (the expansion into other regions, ever-first arrangement of Region‘s Competition)

We started now with the Open Training in Vilnius and Kaunas. It was a very good first step. Now from August we will continue across all regions. The main aim is to find and invite all girls and give them chances to train with Regional and National coaches. But it isn’t only for players, it’s also for local coaches to support the project, so they can also become a Regional or a National coach. In a later phase we will organise matches between the regions.

-You are working already half a year in the position of Head of Lithuanian Women‘s football development. What major steps have you planned to implement this year and beyond?

As said before, we created an Action Plan. Whereby we have many steps in the coming months and years. Because of Covid19 we are adjusting our course slightly. But the some of the aimes to help develop the Lithuanian Women’s Football are:

Players: by giving the chances to train with regional and national coaches, creating the pathway.

Coaches and Clubs: Workshops to spread the importance and professionalism of Women’s Football.

Leagues: In cooperation with Women’s Football League Association, to help the leagues to become more professional.

National teams: Having a clear Talent Identification process and implementing the style of play. 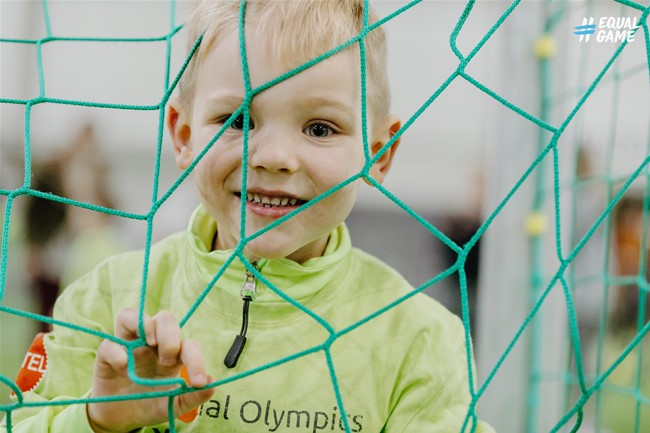 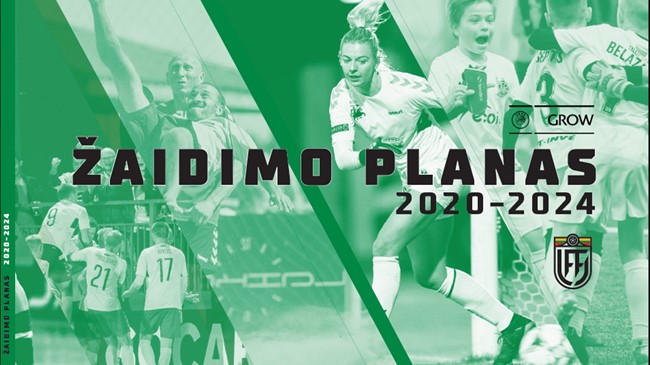 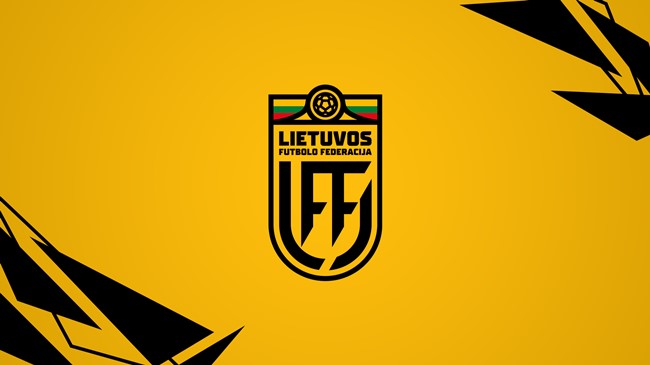